On June 18, 2019, the FDA released a final guidance document to clarify how to display Added Sugars on the Nutrition Facts panel for single-ingredient sugar products such as table sugar, honey, maple syrup, etc. Read the FDA’s full statement here.

The 2018 Farm Bill passed with this text:

The food labeling requirements under section 403(q) of the Federal Food, Drug, and Cosmetic Act (21 U.S.C. 343(q)) shall not require that the nutrition facts label of any single-ingredient sugar, honey, agave, or syrup, including maple syrup, that is packaged and offered for sale as a single-ingredient food bear the declaration “Includes X g Added Sugars.”

This caused some confusion in the industry on how to proceed with labeling. Was this meant to suggest we get rid of the Added Sugars line altogether? Should we keep Added Sugars but display all values as 0?

The FDA’s statement on the final guidance says this

… for single-ingredient sugars, the Nutrition Facts label will still include a line for Total Sugars with the amount per serving expressed in grams; however, the line below it – which has been reserved for Added Sugars – will only provide a percent Daily Value for Added Sugars.

Furthermore, a dagger symbol must be placed after the %DV on the Added Sugars line which refers consumers to a footnote located just below the % Daily Value Statement at the bottom of the Nutrition Facts label. The statement, which relates the amount of Total Sugar and the %DV of Added Sugars, should be expressed as follows: “One serving adds Xg of sugar to your diet and represents X% of the Daily Value for Added Sugars.” 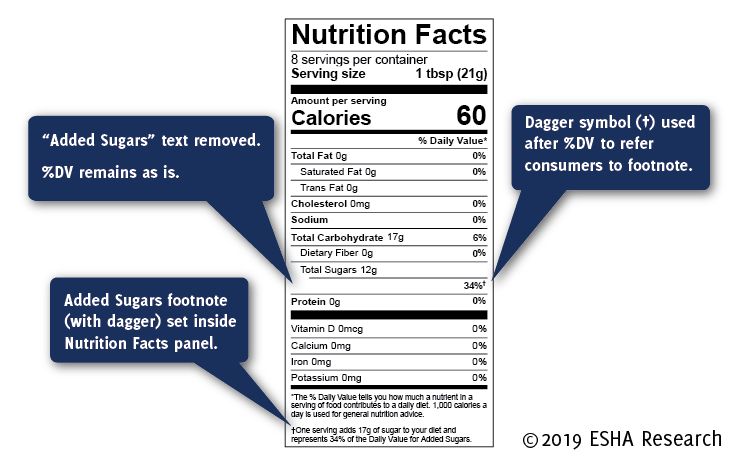 The agency initially addressed issues with maple syrup, honey, and certain cranberry products by allowing those industries to use a special symbol and clarifying statement about the added sugars amount shown on the label. The FDA allowed modifications for single-ingredient sugar products after hearing concerns from the maple syrup and honey industries that consumers may mistake their pure products for ones adulterated with corn syrup or table sugar.

While added sugars declared on the updated Nutrition Facts label include sweeteners added to processed foods, they also include foods that are “packaged as such” including a bag of table sugar, jar of honey or container of maple syrup. We recognized that this new labeling information on “packaged as such” products may inadvertently lead consumers to think their pure products, such as a jar of honey or maple syrup, may actually contain added table sugar or corn syrup because there are “added sugars” listed on the label.

The guidance for dried cranberry and cranberry juice, however, will remain as originally published. The label must display both the Added Sugars gram amount and %DV, but can use a dagger symbol (†) immediately after the %DV to lead consumers to a clarifying statement. This factual statement, in contrast with the single-ingredient Added Sugars footnote, must be placed outside of the Nutrition Facts label and say something like “Sugars added to improve the palatability of naturally tart cranberries.”